Timothy R. Yost becomes CFO on Sept. 5 at the $4.2 billion Clark Construction Group LLC, based in Bethesda, Md. Yost, 36, replaces Dale S. Rosenthal, who moves up to president of Clark’s financial services group. Yost joins the company after more than 11 years at The Corporate Executive Board Co., the Arlington, Va.-based provider of business research and analysis services, where he held a number of positions before becoming CFO in September 2002.

Steven J. Ford will be the new vice president and CFO on Nov. 1 at Carlisle Companies Inc., the $2.9 billion diversified manufacturing company based in Charlotte, N.C. Ford, 48, succeeds Carole P. Lowe, 42, who becomes president and CEO of Trail King Industries, a wholly owned subsidiary. Ford has been vice president, general counsel and secretary since joining the company in 1995, and will retain his responsibilities as general counsel and secretary.

Carl Bass has added the title of interim CFO to as president and CEO at Autodesk Inc., the $2.2 billion design software maker based in San Rafael, Calif. Alfred J. Castino, 55, resigned as senior vice president and CFO in May to spend more time with his family. Bass joined the company in September 1993, and became president and CEO in April 2006. 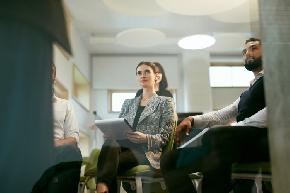 Challenges in Avoiding Disability Bias When Using AI in Hiring

“I get nervous when employers are using AI in the hiring process. You may not realize all the things you need to be thinking about. Yes, it is very dangerous.”

How Long Will the Hot Labor Market Last?

As the Fed works to rein in inflation, it risks undermining the bargaining power workers have gained since the start of the pandemic.