If Winston Churchill’s observation that “the optimist sees the opportunity in every difficulty” still holds, then upbeat treasury leaders possess especially sharp vision these days.

If Winston Churchill’s observation that “the optimist sees the opportunity in every difficulty” still holds, then upbeat treasury leaders possess especially sharp vision these days. Corporate treasury functions are con­tending with a raft of regulatory demands and technological disruptions at the same time the broader economy is character­ized by rising interest rates, Brexit, and other macroeconomic disturbances. De­spite formidable volatility, most treasury executives who participated in the “2018 Cash Management Survey” from Treasury & Risk see their organization’s cash reserves holding steady or increasing during the next 12 months. (See Figure 1, below.) Nearly 30 percent of respondents expect cash reserves to rise by more than 10 percent.

Those projections are notably higher than the cash reserve changes that survey respondents say occurred within their companies during the past year: Only 15 percent of organizations increased cash reserves by more than 10 percent over the past 12 months. “These responses demon­strate that companies are very optimis­tic about the economy and about their prospects for a higher level of cash,” says Michael Berkowitz, Citi’s North America and global product head of liquidity management services.

The survey was completed in Sep­tember by treasury executives across all industries. Thirty-three percent of responding companies post annual rev­enues of less than $100 million; 40 per­cent earn $100 million to $10 billion; and 27 percent exceed $10 billion.

Projected boosts to operating cash flows mark the most influential factor on cash reserve changes in the coming year, followed by reductions in capital expenditures and merger-and-acquisi­tion (M&A) activity. The ongoing impact of the U.S. Tax Cuts and Jobs Act (TCJA) remains a formidable factor, cited as having an impact by 22 percent of re­spondents who expect cash stockpiles to grow. Treasury functions, spurred on by rising interest rates, continue to transi­tion from a post-crisis defensive crouch to an aggressive focus on maximizing both liquidity and yield.

Executing these two objectives will require an optimistic mindset given the combination of challenges impeding cash management activities. The survey re­sults show that treasury leaders plan to work through uncertainty by re-ordering cash management priorities, consolidat­ing the number of banks they use for cash management, and working with their banking partners to optimize new treasury technologies.

It is important to consider this year’s survey results in light of several signifi­cant forces. From a regulatory standpoint, Basel III requirements continue to drive revisions to multinationals’ liquidity strategies. On the macroeconomic front, Brexit is causing many treasury functions to reconsider where they issue European payments and to rethink cash pooling structures. The U.S. Federal Reserve’s draining of liquidity from the financial system is elevating short-term interest rates and reversing quantitative easing, which is nudging longer-term rates higher as well. This trajectory suggests that there will be less cash in the banking system in the near future, which should challenge survey respondents’ rosy expectations re­garding their own cash reserves.

Widespread technology advancements and related digital transformation initia­tives promise attractive long-term ben­efits—including faster global payments and new payment models—but also give rise to shorter-term disruptions and risks. Artificial intelligence, robotic process auto­mation, blockchain applications, and other advanced technologies enable “treasur­ers in multinational corporations to work more efficiently while also gaining a bet­ter view into where cash around the world sits and the possibilities for it,” Ruiz-Singh points out. Yet treasury’s growing use of data and data-sharing gives rise to new cybersecurity and fraud risks, as well as compliance concerns. The “vulnerabilities presented by changing payments methods, more aggressive cyber risks, and manag­ing through evolving and rapid technologi­cal changes challenge corporate treasuries to rethink their role in cash governance,” Ruiz-Singh adds.

The TCJA forced corporate treasur­ers, CFOs, and chief tax executives to evaluate how much cash to repatriate to the U.S. and how to reorganize different legal entities to optimize tax exposure and cash reserves. Treasurers and their executive colleagues also have been busy deciding where to invest tax-cut savings. A recent Korn Ferry Interna­tional survey indicates that increasing capital investments and cash reserves are the two highest priorities. “Changes in tax code can impact cash manage­ment, as organizations rethink their internal banking structures, decide whether or not to pay down debt, and work to get their treasury and tax profes­sionals working more closely together,” Ruiz-Singh points out.

Other changes to corporate in­vestment policies, including adding new asset classes and ratcheting up enforcement of the rules, reflect re­sponses to the changing interest rate environment. Companies that moved away from prime money market funds obviously needed to evaluate bank de­posits, treasuries, government money market funds, or other alternative as­sets. As interest rates climb, Berkowitz notes, “scrutinizing your investment portfolio becomes all the more impor­tant due to the larger potential yield you’re sacrificing by not managing it efficiently with the best possible in­vestment options.”

Looking Ahead, for Yield

In cash and short-term investment decisions, treasury functions generally place the highest priority on safeguard­ing principal. Once they’re comfortable that their investment options are accept­ably stable, their attention turns to other rungs on their hierarchy of cash manage­ment needs—specifically, maximizing li­quidity and maximizing yield.

That’s the trend we’re seeing now. Since the financial crisis, corporate trea­sury teams have invested substantial ef­fort in safeguarding principal through such actions as process improvements and counterparty risk reviews. This work has paid off, so now, as interest rates rise, many treasury functions are adjust­ing their cash-management objectives. Survey respondents prioritize their goals for cash and short-term investments as follows:

As treasury groups execute on these priorities, they are not planning to repa­triate a lot of funds. Among the 59 per­cent of respondents whose companies have cash or short-term investments overseas, three-quarters (76 percent) indicated that the proportion they hold abroad will not change significantly over the next year. Among those that will make changes, 12 percent expect to make a small reduction and 10 percent a significant reduction in the proportion held abroad.

Given the potentially messy Brexit divorce and a looming EU tax overhaul, among other factors, treasury functions with short-term investments in Europe and elsewhere overseas should remain on their toes. “High volatility in the foreign exchange markets continues to challenge corporate treasury organiza­tions,” Ruiz-Singh reports. “The abil­ity to pull insightful foreign exchange exposure data easily and with accuracy appears to have become an increasing priority.”

Overall, survey respondents do not expect U.S. tax reform to be a leading factor in determining the size or loca­tion of their cash reserves in the coming year; only 4 percent selected the TCJA as the factor having the most impact (among 11 options). However, these trea­sury professionals may want to recon­sider. “Based on our discussions with clients,” Berkowitz says, “we think that the majority of cash repatriation is yet to come.”

These expectations are intensifying as macroeconomic conditions continue to swirl, regulators demand more—and much more detailed—information, and internal processes become more complex. Survey respondents indicate that they want their banking partners to introduce more simplicity and transparency to their relationships. 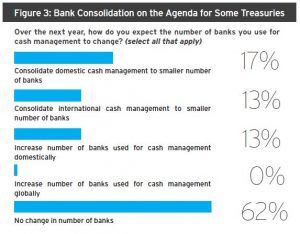 The nature of corporate banking relationships is also changing, according to those on both sides of the partnership. Treasury leaders who responded to the survey identified “getting technology to work properly” as their top focus in their cash management banking relation­ships, cited by nearly half of respondents (47 percent). This is not surprising, given the significant changes most treasury functions have made to internal treasury systems as well as many banks’ embrace of digital transformation and advanced technology designed to improve user ex­perience.

“It’s our goal to simplify treasury processes for our clients,” Berkowitz says. “That means ensuring that our technology works well with their propri­etary and third-party technology. Our goal is to make their experience with our systems as consistent and conve­nient as possible.”

The price companies pay for cash management services largely held steady or increased modestly during the past year: Sixty-five percent of respon­dents reported no significant change in price, 18 percent said costs increased by less than 10 percent, and 12 percent reported a price increase of greater than 10 percent.

So long as those price increases re­flect offerings that equip treasury leaders with the transparency neces­sary to see the available opportunities around them, treasury functions ap­pear likely to accept them. After all, as more regulatory and macroeconomic disruptions unfold, all treasury func­tions will need to avoid the pessimist’s tendency to see only the difficulty in every opportunity.

Also from the October 2018 Special Report

SPONSORED STATEMENT: Diversity and Client Focus: A Prescription for Innovation

Planning Liquidity in Times of Uncertainty

Responses to the 2022 AFP Liquidity Survey reflect treasurers battening down the hatches as they prepare for an extended period of unpredictability and likely volatility.