Instant Insights / Treasury in the Time of Coronavirus

The Covid-19 pandemic has thrown treasury teams around the world into a tailspin. From liquidity concerns to supply-chain breakdowns to fears of an impending global recession, treasury sits at the crossroads of the coronavirus's myriad impacts on multinational businesses. Treasury & Risk is committed to helping readers navigate these turbulent times. We have ramped up our coverage of issues related to the pandemic, and this Instant Insights makes that coverage easier to access. Stay well, readers!

Treasury teams should consider these three factors before using derivatives to hedge against the possibility that rates will rise.

It’s not news that interest rates—in the United States and across the world—have hovered around historic lows for the past few years. After a brief foray into raising rates in 2018, the Federal Reserve reversed course last year and has been on a lowering trajectory ever since. In late April, the Fed pledged to keep the federal funds benchmark rate between 0 and 0.25 percent.

However, at some point, rates will rise. While some market observers expect the U.S. federal funds rate to dip below zero within the next year, others are preparing for the inevitable increases of the future.

Research released earlier this year by Chatham Financial indicated that 91 percent of public companies have exposure to interest-rate risk, and that 39 percent of public companies use derivatives hedging to mitigate that risk. Amol Dhargalkar, a managing director for Chatham Financial who leads the firm’s global corporate sector, says companies are increasingly evaluating whether they should lock in today’s rates for their future debt.

“All-time lows on Treasury and swap rates have driven companies to identify funding needs over the next several years, in an attempt to lock in base funding costs for future issuances,” he says. “For issuances under six months away, investment-grade companies tend to utilize Treasury-based hedges, such as Treasury locks, because issuances tend to be indexed to Treasury yields.” 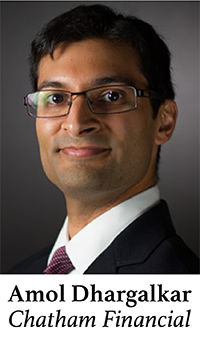 Issuances that are farther away are also hedge-able, but treasury teams looking more than six months ahead typically utilize different instruments. “As a company looks to hedge risk that is farther out in the future, transaction costs associated with Treasury locks increase materially,” Dhargalkar says. “Consequently, companies have instead used forward-starting, cash-settled swaps to hedge these issuances.”

Either way, if rates rise between now and the time that the debt is issued, “the derivatives are settled as assets to offset the higher issuance yield,” he explains.

With rates near zero, it’s easy to see the appeal of locking in current rates to keep the cost of future debt issuances low. Dhargalkar recommends that companies which haven’t used derivatives hedging in the past consider prospective hedges along three dimensions:

1. Structuring. Treasury teams must decide which derivative type—Treasury- or swap-based—makes the most sense for their company’s situation. Evaluate the tradeoffs associated with selecting one option versus the other.

2. Execution. Interest-rate hedges are different from other derivatives, in that the typical structure creates more risk and a higher potential for losses in the swaps. “Specifically, every 5 additional basis points that a company pays on a hedge for a $500 million, 10-year future issuance costs the company over $2.5 million in incremental interest expense,” Dhargalkar says. “Designing an execution strategy to properly reward relationship banks, alongside having insight into what peers are paying for similar transactions, can be challenging on unique transactions such as these.”

3. Accounting. The ideal accounting treatment for the derivatives enables the company to defer gains and losses on the hedge until the date the associated debt is issued. At that point, the hedge termination value should be amortized over the life of the issuance itself. “Hedge accounting can be quite complicated, though,” Dhargalkar warns. “Companies should be prepared to navigate the nuances of the accounting standards well before executing any specific transactions.”