Optimizing Credit Facilities That Support Cash Sweeps Around the World

Years ago, Microsoft was a pioneer in zero-balance account (ZBA) structures, which automatically sweep an organization’s cash from multiple accounts at the same bank into a consolidated header account. “We were one of the first corporates to have a fully automated ZBA structure that went cross-country, cross–legal entity, with 100 percent account automation in our SAP ERP [enterprise resource planning] system,” says Jim Scurlock, head of cash management for Microsoft.

Then, the company began encouraging its banks to support multi-bank target balance agreement (MBTBA) arrangements, which provide similar cash-pooling functionality but among accounts held in different banks. For both ZBA and MBTBA structures, participating banks ensure that the accounts can support the requisite cash flows by providing Microsoft with intraday credit facilities.

For example, Scurlock says, consider a bank account in Paris that’s used to handle Microsoft’s accounts payable (A/P) across France. Because it’s part of a ZBA, the account’s balance every morning is zero. Now, suppose a tax payment in the amount of 100 million euros will be paid from that account on September 1. By that date, the account will need access to an intraday overdraft facility of at least 100 million euros. The facility will fund the account to cover the tax payment, and at the end of the day, the ZBA process will settle up by transferring 100 million euros from the associated ZBA header account.

Microsoft has 1,300 bank accounts globally, across 118 countries and with around 85 different banks. More than 700 of those accounts are set up with a ZBA or MTBTA structure. Moreover, the company’s bank accounts are perpetually in flux. “We acquire another company about once every three weeks,” Scurlock says. “With that volume of acquisitions, we are constantly adding, closing, moving, and replacing accounts.”

Edda Kuhlmann, treasury manager, says lack of standardization also impacted treasury efficiency. “Overall, we had about $50 billion in facilities linked to ZBA and MBTBA accounts,” she says. “The most challenging part of managing those facilities was that requirements differed from bank to bank, and from country to country. Some banks could separate a facility by country, while others had to do it by bank branch. But what they were doing in Western Europe would be different from what they were doing in the U.S.”

Kuhlmann launched an initiative to restructure these facilities. She worked with colleagues from cash operations, global payroll teams, and local tax controllers around the world, as well as Microsoft’s primary partner banks, to identify all impacted accounts. They jointly defined the purpose and sweep structure for each of more than 1,000 bank accounts, detailed every account’s cash flows over the past three years, and identified local restrictions that might impact the account’s ability to be included in global cash-pooling structures.

They collected all this information in a single database and developed a model that calculates the optimal size of credit facility for each account. “We ran an analysis to determine, essentially, whether there would be sufficient money—but not too much money—in each account for all its collections and disbursements,” Kuhlmann explains. “We had to find the normal amount, but we had to find the outliers as well.” 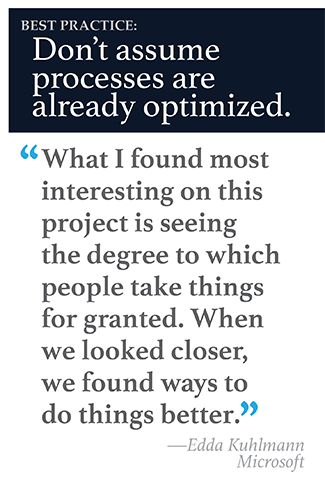 Many accounts have routine outflows at a certain, relatively small level, but then occasional tax or bonus payments that are much larger. Kuhlmann provides the example of a $100 million tax payment, due on a specific date once a year, that comes out of an account where the maximum outflow is $500,000 for every other day of the year.

The solution for such an account, she says, might be to link it to a $1 million credit facility, while also building a process through which treasury can change the size of that facility for a short period around tax day every year. Then, once the tax is paid, the facility might shrink back to $1 million.

In addition to establishing the correct size for each credit facility, Kuhlmann and her team documented the communication channels to each partner bank, to streamline the process of requesting ad hoc and temporary increases in facilities, as needed.

They also created reports, which they share with stakeholders via Microsoft Teams. These reports clarify actual daily disbursements by entity, group, or bank account, for real-time evaluation of the appropriateness of each credit facility’s sizing. The reports also allow for proactive comparison of credit facilities with forecasted expenses across several subcategories of spending.

“Microsoft has about 500 legal entities,” Scurlock says. “Every month, each of those entities is submitting a rolling three-month or 12-month forecast. We’ve built a companywide process around cash forecasting, and now we can add information related to our overdraft facilities. We run all that data through our new model, to see whether there are any upcoming cash flow outliers where our credit facility won’t be large enough. Then, treasury operations can proactively approach the bank to remedy the situation.

“I think a major benefit of this project is that now we are managing this centrally for all our subsidiaries, rather than having each treasury manager handling all the different permutations for their own subsidiaries,” Scurlock adds. “It’s efficient, because it only takes us the five seconds needed to refresh the data. It’s also important to have one person managing communications with the banks, so if we need to change something relatively quickly, we have a standardized approach and know we’ll be able to get it changed.”

This can be especially important in emerging markets, Kuhlmann points out. “Knowledge of these credit facilities can vary pretty substantially from country to country,” she says. “Things that are relatively easy to set up in the United States might be more challenging in other markets where the local bank relationship manager might not have a very good understanding of the requirements to make this work.”

One other facet of the project was the establishment of intraday overdraft facilities, standard credit facilities, or parent guarantees for bank accounts that Microsoft cannot incorporate into its global cash-pooling structure for regulatory reasons. “What we were trying to avoid was a missed timing on cash flow,” Scurlock explains. “For example, we didn’t want to risk ever having a subsidiary miss payroll because the account had been drawn down unexpectedly by A/P. We worked with our financial controllers and each of our banks, one by one, to ensure that we had a proper facility in place to guarantee we would always have enough liquidity for every account.”

Ultimately, continuous improvement is one of the key benefits of having a single point person who understands the intricacies and nuances of all the cash pools and related credit facilities around the world. “What I found most interesting on this project is seeing the degree to which people take things for granted,” Kuhlmann says. “Oftentimes, everyone just assumed our previous ZBA-liquidity process was working. It was working to a degree, but when we looked a little closer and started asking a bunch of questions, we found ways to do things better.”