Based in Boston, Alexion Pharmaceuticals is a global biopharmaceutical company focused on serving patients and families affected by rare diseases through the innovation, development, and commercialization of life-changing therapies. The company does a significant amount of business in 15 different currencies, so foreign exchange (FX) risk is top-of-mind for the treasury team. Nevertheless, when Alexion’s revenue quadrupled over just four years, the sophistication of its FX processes needed to increase commensurately.

“A few years ago, we had two people in Switzerland placing hedges at a transactional level,” explains Jeff Hynes, assistant treasurer. “They used spreadsheets to track the company’s balance sheet and cash flow risks. They would look at each invoice or payable coming in and decide whether to hedge it on a one-off basis. It worked, but only because of the brute force they were applying in terms of manpower.”

The pair would pull accounts receivable (A/R) data from the company’s enterprise resource planning (ERP) system every day, because A/R is a large driver of Alexion’s FX exposure. However, accounts payable (A/P) and other balances were sourced only weekly or monthly because retrieving them was too time-consuming to merit a daily schedule. Where they didn’t have actuals data, the team would generate forecasts.

“One of the individuals handling FX risk had been with the company for a long time, so he knew when to expect certain payables and receivables to hit the books,” Hynes says. “For example, he might know that one particular country would always receive large payments on day 4 and day 12 of the month. He also knew the controller in every country, so he would regularly call them up and ask whether transactions he was expecting had come through. Then the team would place hedges based on this informal forecasting process.”

At the end of every month, they would close out the month’s trades by aggregating them in a spreadsheet and netting the amounts by bank and by currency. This was inefficient and required extensive effort to avoid the potential for any data-entry errors. To prevent the process from becoming even more unwieldy, Alexion assigned each currency to a single bank.

“If you have 10 banks, each settling trades in 10 currencies, you might have 100 payments to close out,” Hynes says. “That would be an enormous headache because it would take so much time to work out the net value in spreadsheets. But if you have 10 banks and each is assigned just one currency, you have just 10 accounts to close out trades for. That approach kept the number of settlements we needed to make from blowing up, but it also gave the banks leverage over pricing because they knew they had our business for their assigned currencies.”

Not only were Alexion’s FX risk management processes inefficient, but they also included key-person risks. “We were very dependent on that one person who knew everything about A/P and A/R at the company,” Hynes says. “We had around $400 million in balance sheet hedges outstanding at any given time. At that size, we needed an FX risk management program where we were hedging balances, not individual items, and we needed to be confident the hedging program would continue to operate seamlessly if that one person left the company.”

When Alexion decided to transition the Swiss treasury functions to the United States, the time was right to upgrade the balance sheet hedging process. The Alexion treasury team decided to use automation to capture changing FX exposures every day. After evaluating the risk management technology landscape, the company chose to implement FiREapps.

Connecting FiREapps to the company’s SAP ERP system required a data-validation process in which Alexion treasury discovered that some details of the company’s ERP configuration could be improved. “There were some minor aspects of SAP that hadn’t been set up in a manner to allow us to get the most out of FiREapps,” Hynes says. “The FiREapps implementation team helped us find areas where we could improve, and once we implemented the changes they identified, we were able to proceed more efficiently and get the results we wanted.”

Soon, exposure data was flowing smoothly. Now FiREapps receives complete information on the company’s FX exposures from SAP every day, as well as a file listing the open hedge positions from Alexion’s treasury management system. FiREapps uses this data to calculate the company’s net FX exposure, as well as to show how it has changed in each currency pair since the last time Hynes’ team placed a hedge.

“All the file drops happen at the same time, before we get into the office,” Hynes explains. “We get a report with our net FX exposure position. We arrive in the morning, look at the report to make sure all of our positions are as expected, and check on anything we have concerns about. We haven’t seen any data errors, but sometimes we need to check on timing issues.”

When treasury is satisfied that the net position is up-to-date and accurate, FiREapps recommends trades across any of 15 currency pairs. “We generally don’t hedge unless our net exposure position changes by at least $1 million,” Hynes reports. “For changes that are slightly higher than that floor, we use our judgment. When we want to make a trade, we punch a button in FiREapps, and the trade automatically appears in FXall. Then we punch a button in FXall, and our position is hedged.”

Once a month, Hynes’ team also checks SAP for new accounts. When an account has been added, they make sure that its general ledger (G/L) codes map into FiREapps properly. 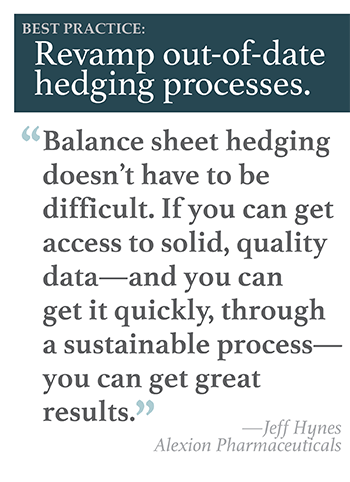 The increase in efficiency has been monumental. “Assuming the data looks good to us when we arrive in the morning, we can do the hedging in less than 15 minutes,” Hynes says. “Compare that with our previous environment, where two people were dedicated to FX hedging full-time.” Not only has staff productivity improved dramatically, but treasury has reduced trading costs by more than $1 million a year. Most of those savings come from introducing competition among banks.

“Since we automated these processes, it no longer matters whether we have 10 trades to close out or 1,000,” Hynes says. “We just punch a button in our treasury management system and all the netting is done for us. It no longer matters if one bank gets our GBP business today and another gets GBP tomorrow. So now our banks have to compete for each currency.”

In addition, the new system provides much better visibility into the company’s current position in each major currency. Because netting was so challenging before, treasury would need to do very careful and time-consuming analysis to make certain they did not enter into a hedge when exposures actually canceled each other out.

“This system provides us with clean, netted data every single day,” Hynes says. “The whole idea was to get away from transactional hedges and move to balance-level hedging. We’ve driven down the pricing from banks by introducing competition, and we can quickly perform the analysis to ensure that we’re hedging only when we need to. At the same time, we’ve kept FX volatility to a minimum of about 1 cent per share.”

Hynes concludes: “What I’ve learned from this process is that balance sheet hedging doesn’t have to be difficult. If you can get access to solid, quality data—and you can get it quickly, through a sustainable process—you can get great results. You’ll have to boil down a lot of data to get there, but there are technology solutions on the market now that make it possible.”

And winners in our other categories of 2018 Alexander Hamilton Awards:

Treasury teams should consider these three factors before using derivatives to hedge against the possibility that rates will rise.