Congratulations to GoDaddy, winner of the 2020 Gold Alexander Hamilton Award in Treasury Transformation!

When a company grows rapidly, corporate support functions like treasury sometimes have to scramble to catch up. This was the situation at one of the leading providers of cloud-based solutions, GoDaddy.

Since going public in 2015, GoDaddy has grown at a 17 percent compound annual growth rate (CAGR). The company’s revenues nearly doubled during this time, to $3 billion in 2019. Meanwhile, the company expanded geographically and added a number of new lines of business. “Today, GoDaddy provides about 22 percent of the global Internet domains under management,” explains Paul McDowell, the company’s vice president and treasurer. “We offer simple, easy-to-use products and services, and outcome-driven, personalized guidance to small businesses, individuals, organizations, developers, designers, and domain investors.”

“As a company, we have embraced a lot of change in recent years,” emphasizes treasury director Scott Moran. “That change has continued to push the business forward, enabling us to succeed in our ultimate goal of supporting entrepreneurs everywhere in doing what they do.”

GoDaddy quickly matured into a large multinational corporation, but it did so with a lean treasury function. The team consisted of a treasurer and two analysts. It had a static foreign exchange (FX) hedging program and a simplistic investment policy. “Treasury was very much focused on run-the-business tasks such as approving wires, supporting A/P [accounts payable], and performing bank reconciliations,” McDowell says. “It was the treasury function you might expect to see in a small, domestic company versus an integrated strategic treasury function.”

When McDowell signed on as treasurer in May 2018, his mission was clear: Raise the sophistication of this function so that treasury could more effectively serve the large, global business. To accomplish this objective, he launched a broad-based initiative called “Total Treasury Transformation,” or “T-cubed” for short. Job one for T-cubed was to bring skillsets of treasury staff into line with the increasing needs of GoDaddy.

“The existing team had grown up within GoDaddy and moved from handling specific transactional processes into serving as treasury analysts,” McDowell says. “They had not worked in a large treasury environment, and I saw some gaps in the technical skillset.” McDowell spent a lot of time evaluating how treasury tasks were accomplished in the legacy environment, then developing a treasury structure that would be a better fit. He got approval to hire two treasury directors—one assigned to back-office treasury functions, such as banking and operations, the other assigned to investments and risk management. Each treasury director would be supported by one of the treasury analysts.

GoDaddy hired the treasury directors from companies of similar size and complexity to ensure they arrived understanding how mature treasury functions typically operate. McDowell is quick to point out that despite the shift to formalize the treasury structure, his function is still very flexible. “Everybody is in the details here,” he says. “I’ve worked in other treasury functions where the treasury directors and corporate treasurer would not approve wires. Here that still happens. It’s a growing company, it’s entrepreneurial, and as a lean team, we sometimes need to step outside our formal roles.”

A key benefit of the restructuring was the increase in internal knowledge of treasury techniques and best practices. McDowell and his new team developed a plan of action for revamping processes throughout standard areas of treasury responsibility. They developed a roadmap that identified specific action items within 30-day, 60-day, 90-day, and 120-day timelines. With approval from the company’s CFO and buy-in from the broader finance community, they launched T-cubed.

The team also launched a concerted internal marketing campaign designed to build awareness of treasury’s purpose and contribution. “We could see that we needed to educate the broader finance community about the capabilities of corporate treasury,” McDowell says. They created posters defining T-cubed and hung the posters around the office. 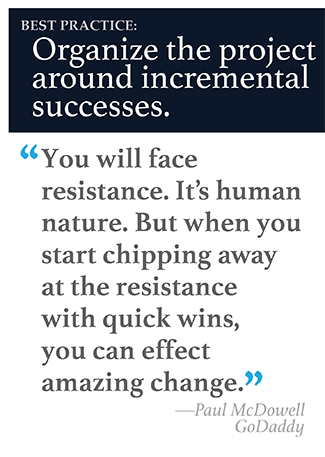 One of the first focuses of the wide-ranging T-cubed project was the company’s investment policy. McDowell saw an opportunity to significantly reduce the amount of cash the company kept in bank accounts around the world. Its legacy cash management practices were very focused on offsetting fees with an earnings credit rate (ECR). “As a result, yield on excess cash was not where it needed to be in a rising interest rate environment,” Moran says. The new team set out to change that. “What we needed was a change of perspective—a fresh set of eyes and a new mind-set,” Moran says. Instead of gauging investment performance based on ECR benefits, GoDaddy began benchmarking investments’ yield against one-month LIBOR (the London Interbank Offered Rate).

The treasury group simultaneously re-evaluated their cash positioning and forecasting processes to better understand required daily float. They already had a Reval treasury management system, and a new training program helped the team understand how to better leverage the software to improve visibility into cash balances companywide. Treasury also began to produce a daily liquidity report with information on global cash balances.

These changes had a fast and substantial impact. Yield on GoDaddy’s cash investments increased by approximately 50 basis points, net of LIBOR increases, while treasury minimized float. “Now we can aggressively go after our goal of ending every day with zero dollars in our various bank accounts,” Moran says. “We’re putting our cash to work.” The company’s CFO publicly acknowledged this success internally.

“Quick wins like this increase visibility among the broader finance community into what corporate treasury is doing and how we are impacting the bottom line,” McDowell says. “It also really helps morale within the team to have a clear indicator of how you’re contributing. I believe in grabbing quick wins wherever you can.”

To improve currency risk management, the treasury team benchmarked their FX hedging strategy against corporate peers and implemented a Bloomberg terminal. They added to their daily liquidity report information on pricing of GoDaddy debt, FX hedges, and interest rate benchmarks, all pulled from the Bloomberg terminal. They also used the Bloomberg terminal to back-test prospective new hedging strategies, including laddering and layering of hedges. As a result of these tests, they discovered that an 18-month layering approach would most effectively reduce FX volatility for GoDaddy.

Treasury also compared GoDaddy’s capital structure with that of comparable businesses. They established a schedule for receiving market commentary from the company’s banks. They also began meeting face-to-face annually, and by phone quarterly, with the ratings agencies to enhance those relationships, with the goal of obtaining a ratings upgrade.

Taken together, these initiatives increased the sophistication of GoDaddy’s treasury function so that the team is now well-prepared to support a large, multinational business. It hasn’t been an entirely easy process. To complete a project like this, “you have to be stubborn,” McDowell says. “You will face resistance. It’s human nature to respond to change by saying ‘That’s not how we do things; what are you thinking?’ But when you start chipping away at the resistance with quick wins, you can effect amazing change.”