Driving a New View of Treasury

German automotive supplier Brose Fahrzeugteile keeps a low profile. The company manufactures what it calls “mechatronic” components—combining mechanical, electrical, and electronic parts—that are incorporated into larger vehicle systems such as doors, seats, steering, and clutches. It operates in 64 locations across 24 countries, with about 6.2 billion euros in annual revenue. But because Brose is a private company that doesn’t produce recognizable consumer goods, it typically flies under the radar.

“One out of every two new cars produced globally contains our products,” says Andreas Meyer, head of treasury at Brose. “However, most of those products are not seen by the car’s end user. For that reason, and because we are family-owned and do not have to publish our financial information, a lot of people are unfamiliar with Brose, even within Germany.”

Several years ago, Brose treasury had an even lower profile; many colleagues within the company were not familiar with what the treasury function had to offer. “There’s a German expression—Schatzmeister—that means people sitting around and counting coins,” Meyer says. “That is basically what the rest of the company thought of us.”

The three-person treasury team—which has since grown to 4.5 full-time equivalents (FTEs)—was responsible for managing the company’s liquidity and foreign exchange (FX) risk, but they spent much of their time on manual data processing and had limited visibility into corporate cash flows. That was partly because Brose’s SAP enterprise resource planning (ERP) system was not connected to the company’s banking platforms.

“All banking authorizations were administered locally,” Meyer reports. “We were using more than 30 e-banking platforms, and payment processes were not standardized at all. People in Mexico were operating differently than in the United States or Germany or China—but they were all creating payments in SAP and then manually moving them into their local e-banking platform.” Payments were time-consuming for local finance staff, and maintaining the connections between the banks and the ERP system consumed a lot of IT time.

In addition to the efficiency challenges, these processes created a risk of fraud. “After a payment was approved, the local finance people could, in theory, have modified the payment file during transfer to the bank,” Meyer says. Moreover, the legacy processes reduced cash-flow transparency. “We didn’t have full transparency into our bank account balances or funds movements,” Meyer adds. “That, of course, was unacceptable. If the CFO asked me ‘What is our liquidity status today?’ and I said ‘I can tell you only 80 percent of our balances,’ then he would not have been very happy.”

Meyer and his team set out to revamp the treasury function at Brose. They started with risk management, where the manufacturer’s key financial exposures are FX and commodity risks. “We built up an entire infrastructure for FX,” Meyer says. “We started using an electronic trading platform so that we could fully automate trades.” Full automation also hinged on rollout of a BELLIN treasury management system, which the team connected to the FX trading platform.

Next, they consolidated the company’s asset management and borrowing within corporate treasury, developing a set of new processes in each area. From there, the team launched a project they called Modernization of the Global Banking Infrastructure, or MOBI. They determined that they needed to tackle the liquidity and payments upgrades on three fronts: processes, technology, and “the mind-set of the impacted users,” Meyer says. The project team carefully planned their approach to change management.

“Very early on, before we even started the project, we informed our finance colleagues in all the Brose entities about what we were doing,” Meyer says. In the annual corporate finance management meeting, and subsequently through follow-up presentations around the world, they presented their project plan. “We described the different phases of the project and explained to them what their involvement would be,” he adds. “We wanted to help the finance organization understand that MOBI wasn’t about centralization for the sake of centralization. One key goal of the project was to automate all the manual processes throughout our global payment infrastructure, which would free up a lot of time in the business units for finance staff to work on more interesting things.” 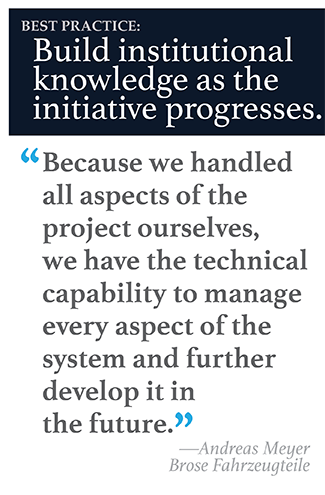 After the intensive communication campaign, the treasury group leapt into MOBI. “We didn’t have the staff resources to do everything at once,” Meyer says. “We had to tackle the MOBI project in sequences.” First up was global payments. Brose installed the BELLIN payment platform with its integrated SWIFT service, which meant the payment platform could integrate tightly with the treasury management system. Then the project team worked with their banks and BELLIN to achieve straight-through processing from the banks to the SAP system, for both payment files and bank statements. At the same time, they rationalized the company’s banking relationships, cutting in half the number of banks Brose used.

Now, for outgoing payments, the legal entities have digitized signing authority. When a Brose entity needs to make a payment, its finance department creates a payment in SAP. Two finance managers within the entity must electronically sign off on the payment, then SAP routes it to the central payment platform. The system performs a final check, and employees with banking authorizations—which are administered centrally by the treasury group—release the payment in the treasury management system. “So central treasury now oversees all electronic banking authorizations globally, and the payment files flow directly to the bank via SWIFT,” Meyer emphasizes. “That means there is no possibility for anyone to change anything in a payment file between its approval in SAP and its transmission to the bank.”

Reconciliations of incoming bank statements are also automated. “Account statements in MT940 format are sent to Brose’s SWIFT code and transported to SAP every 30 minutes,” Meyer reports. They flow into SAP, which then generates a batch input file. “For all of our bank accounts, across every country where we do business, we have an automatic submission of electronic bank statements into our treasury system. That means if anyone asks about whether a certain vendor has been paid, or has some other question about cash flows, treasury can immediately pull up information about every single payment that has been executed in the entire group.”

In addition to the obvious benefits for global payment transparency, these changes have greatly improved the efficiency of Brose entities’ finance teams. “They don’t have to get into their local banking system at all anymore,” Meyer says. “They can just access any information they need through the treasury management system. We can also all write simple queries to analyze the data—for example, ‘How much did we pay to Vendor X, and in what locations?’ The ability to analyze incoming and outgoing payment patterns is another benefit of our new processes.”

Throughout the MOBI initiative, treasury provided support for internal stakeholders who were impacted by the project. “From the first moment, we told them, ‘If you have any questions, we will help you with the new system,’” says Vanessa Rose, a Brose treasurer. “That helped ensure people outside of treasury were not afraid of the new process.”

The result? Local users are spending around 40 percent less time preparing payment files and compiling data, and they are thrilled. “So far, we have received only positive feedback from everyone involved,” Meyer says. Now the company is poised to build on the project’s success, in large part because the team did everything without external assistance. “It is our system,” he says. “We are responsible for it, we are operating it, and because we handled all aspects of the project ourselves, we have the technical capability to manage every aspect of the system and further develop it in the future.”

The project was time-consuming and challenging, but it also established treasury as a strategic partner to Brose’s business units around the world. No longer are treasurers seen as Schatzmeister. “We have improved reliability, security, and efficiency,” Meyer says, “and we have created conditions for further growth and improvement across the company.” 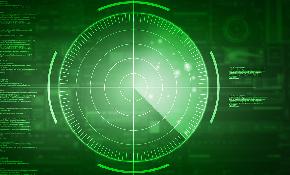 Payment Trends That Should Be on Every Treasurer’s Radar